The relationship between the US dollar and Chinese yuan is widely watched. The US and China are the world’s strongest and largest economies and their currencies are closely intertwined. 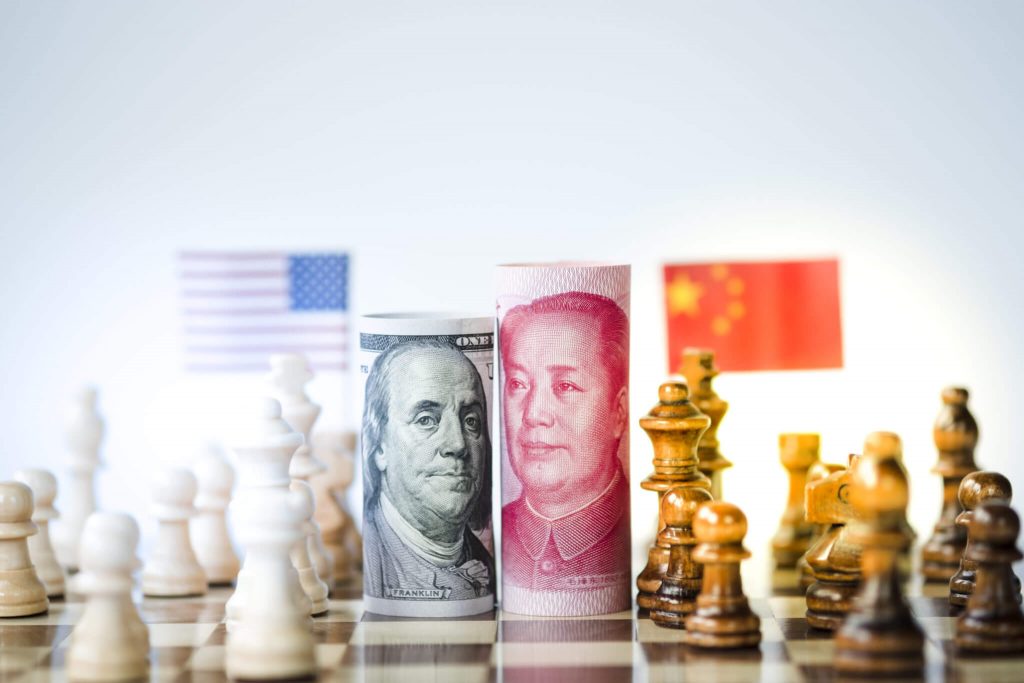 The relationship between the US dollar and Chinese yuan is widely watched. The US and China are the world’s strongest and largest economies and their currencies are closely intertwined. About half of the world’s financial transactions are conducted in US dollars. When there is a global economic downturn, investors typically purchase US Treasury notes as a safe haven. High demand of US Treasuries strengthens the dollar, especially when the US economy is strong, as it is currently. To date, China is the largest holder of US Treasuries in the world, owning over a trillion dollars, it pegs its yuan to the US dollar in part to control the cost of exports to the United States. With the US-China trade war in full swing, economists expressed concern that the Chinese government could weaponize their US Treasury bond reserve by selling down its holdings, thus devaluating the US’ currency.  This strategy is very unlikely since it could also cause severe damage to the Chinese economy.

China’s growth trajectory began when it initially fixed its exchange rate to the US dollar in 1995 to stave off economic instability. The reins were slightly loosened in 2005, allowing the yuan to trade within a .03% margin and again, in 2015, increasing the trading band to expand to 2%. At this time, China implemented a “reference rate” policy. China, unlike other governments who allow their currency to float freely against others, assesses global market movement each day and adjusts its currency according to the previous day’s market activity, to avoid currency volatility and to minimize broader market turbulence. This practice is called a “reference rate” policy. To strengthen the yuan, the Chinese central bank sells its US Treasury bonds, or other foreign currency, into the market. If the country wants to weaken the yuan, it uses its local currency to buy foreign currency.

Since 2008, the Chinese government kept the dollar-yuan ratio just under CNY:7 to US: $1. It was a ratio that was accepted by the US and global markets. A weaker yuan to the dollar makes exports favorable for China, especially important now, since the effect of US tariffs on imports have likely knocked 0.5% to 1% off China’s economic growth. 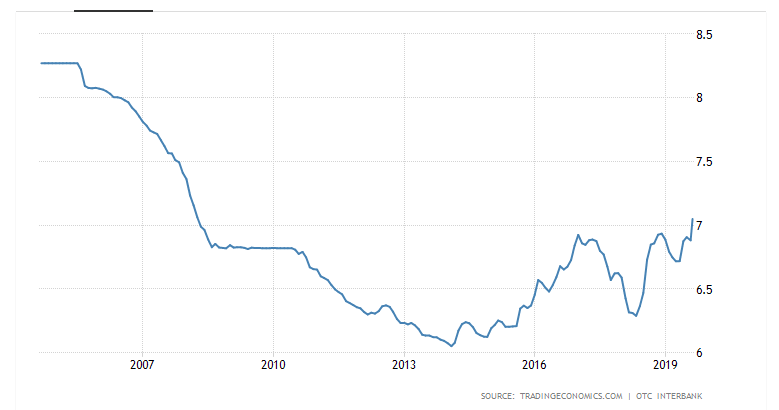 US and Chinese leaders met on July 31, 2019 to further negotiate a trade agreement. With no measurable movement, both parties left with the understanding that the conflict has no near-term resolution. In the days following, the US president indicated that in September, he would increase tariffs by 10% on an additional $300 billion worth of goods imported from China, to incentivize negotiations. Since China imports much less product from the US and cannot inflict the same amount of damage by a counter tariff increase, they postponed purchases of additional US agricultural products. To further retaliate and to demonstrate strength, the Chinese government devalued its currency, allowing the yuan climb past 7. Economists and Chinese officials speculated what a move above 7 would mean to the world markets and China’s concern was that depreciating the yuan beyond 7, could evoke a loss of confidence or be seen as economic weakness.

In early August, the Chinese government allowed the currency to weaken. Analysts have been expressing that this move is long overdue and may serve in China’s long-term best interest. It is estimated that the yuan is overvalued by as much as 10%. The Chinese government has been selling “US$100 billion per month of US assets” according to FXCM, to defend the level of the yuan. The devaluated currency sent global markets tumbling, the US the markets lost nearly 3% in a day, while the US Treasury Department officially designating the Chinese government as a “currency manipulator.” The Chinese government defended its position sighting that the devaluation is caused by investor pressure, due to a slowing and weakening economy resulting from the trade-dispute. China’s GDP growth dipped to 6.2% in the second quarter of 2019, the smallest gain since the country began its rapid trajectory in the early 1990’s.

Economists say that allowing the currency to perform in greater alignment with global market conditions will ultimately provide the flexibility that China needs to deal with its domestic issues such as: over-investing in infrastructure projects, increased credit lending to boost industry and consumer spending and to keep the yuan and GDP strong.

China’s long game is to maintain currency stability, economic growth and forge prosperous relationships with the world market. The Chinese government wants further integration into the global economy by promoting the yuan as an international reserve currency, like the US dollar. The government is cautiously loosening restrictions by allowing its currency to perform in measured accordance with global market conditions.

The US is experiencing high employment and increased wages, which is boosting domestic purchasing power and economic expansion. The dollar may currently be too strong to maintain growth. US leaders have expressed a desire to weaken its value by reducing interest rates, to make the currency more competitive internationally. US exports are expensive in foreign markets beyond China, which adds pressure to US companies, especially manufacturers.

Initially, what started as an attempt to even out a trade imbalance has spilled into financial markets.  Europe and countries in the East dependent on China’s economy are feeling the reverberations of the US-China trade, now financial, war.